Over the last few years, the Gold Coast Airport Marathon has become one of my favourite events. I don’t know that I’m keen to run the actual marathon up there, but I really enjoy the half. This year was no exception.


The weekend began with a bit of a false start when our flight was delayed by two hours. We were still sitting in Sydney airport at the time I had planned to be at dinner in the Gold Coast, and it’s safe to say I was not a happy girl. My mood improved with a surprise on the plane - getting engaged! When we finally got the Gold Coast, we celebrated with take away dinner, then fell asleep. It had definitely been an eventful day!

Our Saturday started with an easy run along the path next to the beach. There were plenty of runners around, and we saw some familiar faces. I had been suffering from “dodgy hamstring syndrome”, and was keen to test it out after a day off. I was able to run with it, but didn’t feel that I was moving 100% freely. Despite that, I was confident I had done the training to go close to a PB the following day.

After breakfast, we went over to the expo. Maybe it’s being away from home, the excitement surrounding the event, the bargains on offer, or all of the above, but I enjoy going to the expo at the Gold Coast. Even the fact that you have to go to collect your bib doesn’t seem like an inconvenience. We collected our bibs, picked up some running accessories (that we definitely needed), chatted about upcoming events, and again, saw some familiar faces. There is a real buzz about this event that carries over the whole weekend.

Next stop was our relaxing Saturday afternoon activity, the Gold Coast Suns game. We carb loaded with fried calamari and greasy chips, and were careful to stay hydrated in the afternoon sun with a few beers. At least we made sure to stay off our feet!

That night’s dinner was a pizza feast, my go to meal before a big race. We went back to the hotel for the pre-race ritual of pinning bibs and taking photos, before going to bed early in preparation for the 4am start! It’s early, but I definitely think we are the lucky ones when the race is over before it gets hot.

When we arrived, I dropped off my bag and did a good warm up, the dodgy hamstring seemed under control. I was lucky enough to be representing NSW in the event, and after a quickly briefing and reminder of the race rules, we walked out to the start line. I love that the race starts in the dark, one of my favourite things about this run! It’s quite unique running the first few kilometres as the sun rises.

I had two plans for the run, ‘plan A’ was to run similar to how I had the two previous years - start conservatively for the first 5km, then increase the pace marginally for the middle 10km, and hopefully finish strong. ‘Plan B’ was to just run!


This year, I have tried to focus on running without worrying too much about what my watch is telling me about my pace. I think it takes practice to train yourself to run on feel. However in my experience, worrying about sticking to a pre-determined pace can be just as much drain on your energy levels as going out too hard. I'm trying to find the right balance.

Early on, I was probably doing more of ‘plan B’ than ‘plan A’. I had started out slightly faster than my rough “conservative pace”, but went with it because it felt okay. I knew from the runners ahead of me and the pace group behind me that I was probably about where I should be. When I got through about 6km feeling strong, I was confident the pace was maintainable for a good chunk of the race.

After the turnaround, the real fun starts. The encouragement from the runners in the other direction always gives you a bit of a lift.

At 12km and 13km, I was still telling myself to stay relaxed, there was a long way to go. When my watch beeped for 14km, it suddenly felt like we were at the business end of the race. I saw that I had slowed down slightly, and decided to put my foot down. I knew that I was ahead of PB pace, and just needed to maintain it to the finish.

I was briefly distracted by approaching a point where I knew there would be a photographer, and managed to post for a photo. At least it meant I was still feeling strong! 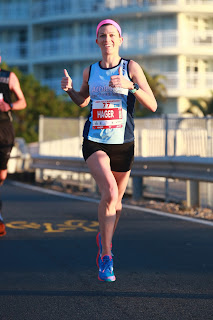 The race didn’t end without a bit more drama, my knee started to tighten up without about 3km to go. I debated if I should slow down to make sure I finished, or speed up to try to finish before it gave up on me. I probably did a bit of both, holding on to finish with a new PB!

Initially I thought that I had followed the ‘plan A’ strategy of increasing the pace towards the end, but my official race splits tell a different story. I was 5 seconds faster in the second half, compared to 54 and 31 seconds in the past two years. Maybe I took more of a "just run" approach after all!

After the race, the celebrations began, first by relaxing in the spa at our hotel, then later at Kurrawa Surf Club. Looking forward to 2017 to do it all over again!
Posted by Bronwyn at 16:08